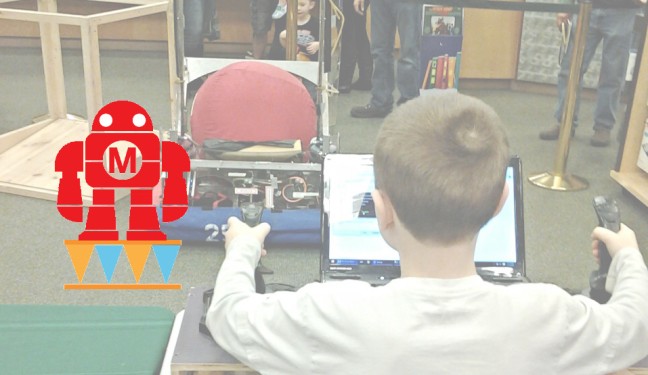 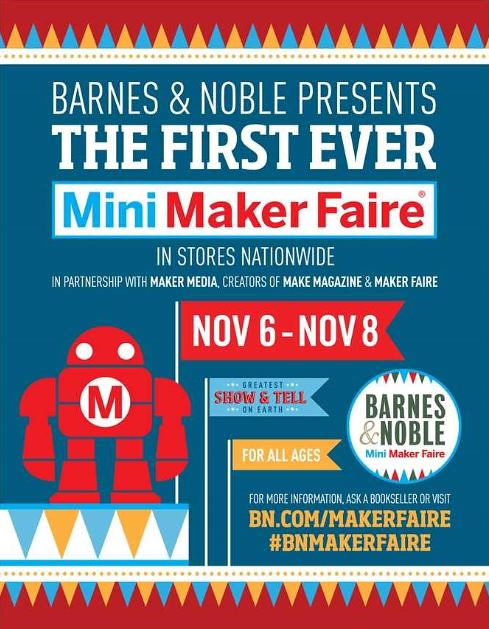 Thanks to Barnes & Noble, Maker Faires are appearing this weekend in cities all across the US.  Gavin has been excitedly awaiting the Mini Maker Faire for over two months. Promotional flyers have been decorating his room. He took enough postcards to invite his Cub Scout Pack. He has even considered the red robot for the theme of his up-and-coming seventh birthday.

“Barnes & Noble is debuting its one-of-a-kind Mini Maker Faire initiative in stores nationwide Friday, November 6, through Sunday, November 8. The weekend-long event is made possible through a partnership with Maker Media, publisher of Make: magazine and producer of Maker Faire, and the support of leaders in the Maker Movement that share Barnes & Noble’s commitment to tech literacy and experiential learning, including XYZprinting, littleBits, Raspberry Pi and others who are excited to be a part of the Maker movement as it expands to communities across America at Barnes & Noble.”

One of Gavin’s Cub Scout buddies happened to be there at the same time. They were able to pal around and build together for a while. They got to watch and feel the constructions of a 3D printer, give voice commands to a Meccano Meccanoid robot, and watch a small quadcopter. They got to draw out loopy paths with markers in selected colored and patterned codes for Ozobots to follow. They also were able to give commands to Sphero to follow on a tablet.  There were demonstrations of all sorts of incredible STEM related toys and gizmos. 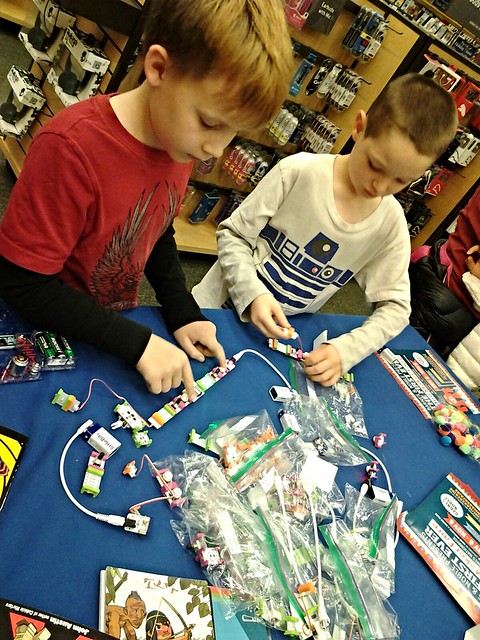 The last few years, I have seen and heard so many raves about LittleBits.  I wondered how cool they might really be, or if they would be something that would have limited options and quickly grow old.  Considering there are entire books being sold about building with these things, I suppose the possibilities must be more than I had imagined.  They were definitely easy to use.  After the demonstration the kids spent quite some time exploring with these sets.  They had a long line of circuits strung together with multiple functions happening at once. 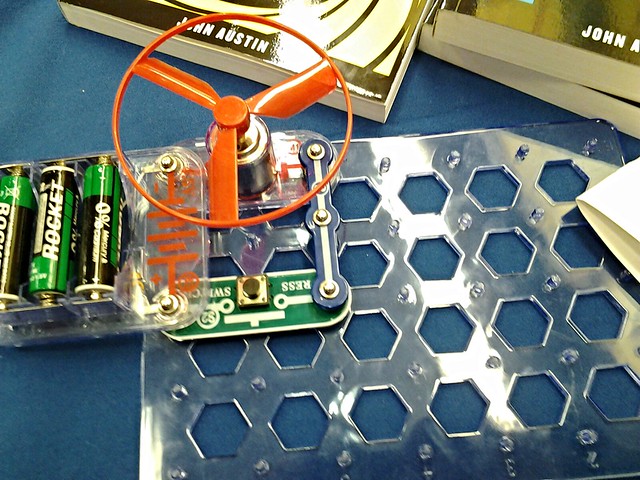 Getting lift-off with Snap Circuits, another toy we have heard lots about, but have never had the opportunity to try. 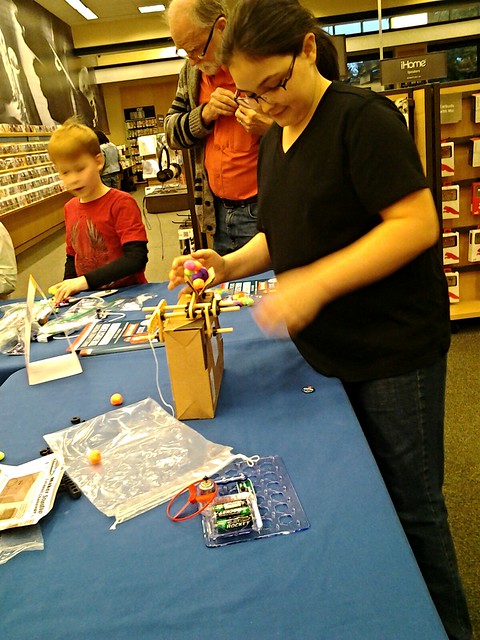 Hannah launching fuzzy balls with a catapult made from a Maker Studio Gears Set. 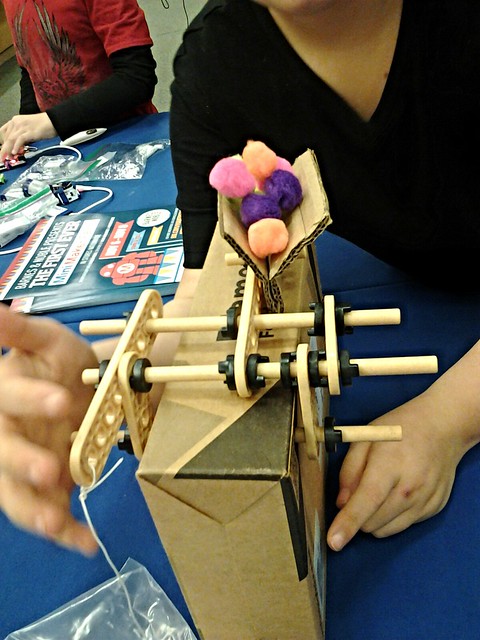 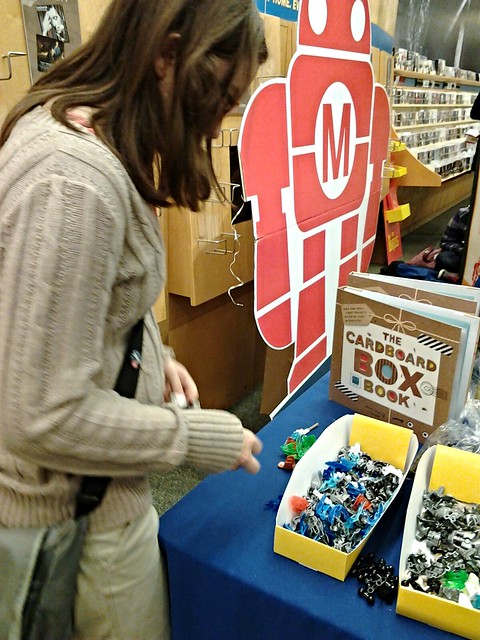 Lauren building with Bionicle Legos that are different shapes than we have ever played with before. 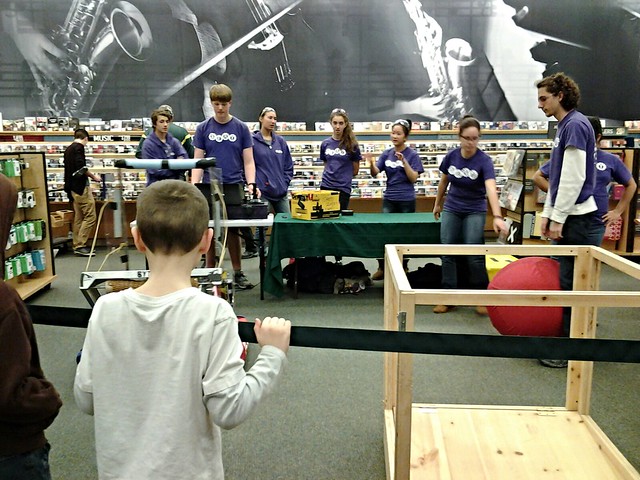 The South Eugene Robotics Team were the guests for the “Meet The Makers” demonstration. They brought a very large robot that their team has made to compete with other teams in the FIRST Robotics Competition.

They demonstrated the robot’s abilities and answered questions about what their team does and how they built their robot. It’s a large machine, operated by joy sticks connected to a laptop computer. It picks up and casts off a large yoga ball. People can interact with the robot by throwing the ball into it’s “arms” or by rolling the ball up into a roller that picks the it back up. The kids, especially Gavin, had a great time throwing and rolling the ball for the robot.   I was reminded of the endless games of fetch played with never tiring puppies. 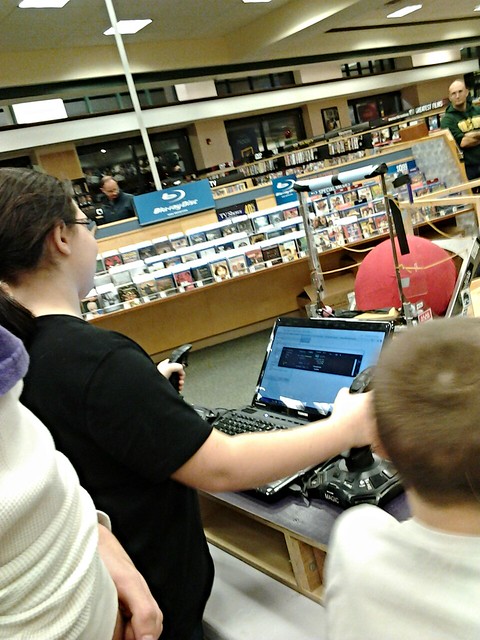 Each of the three younger kids also got a turn driving the robot. 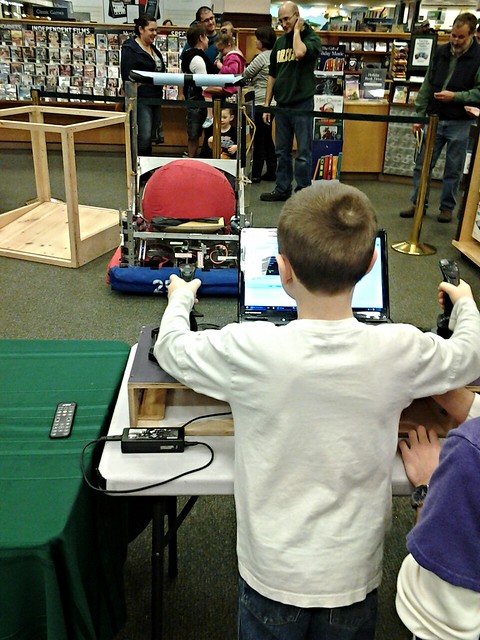 Both Gavin and Lauren were interested in how a person could become part of their team and what other similar groups are available for younger ages.  We’ll definitely have to see if we can track down a Junior FIRST LEGO League in our area! 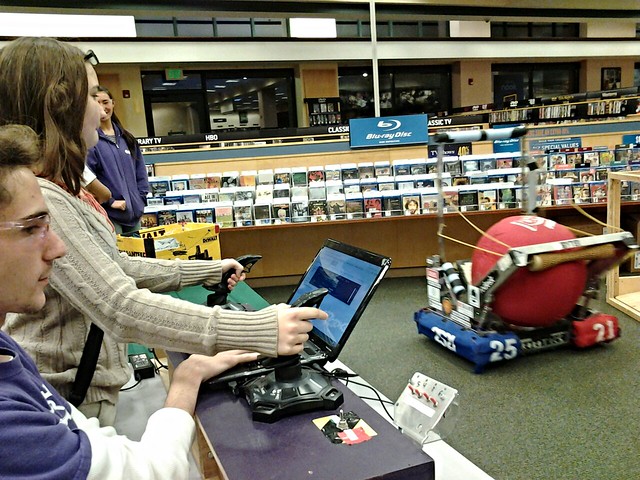 We brought home some really cool Maker Faire stickers, which Gavin has already used to proudly decorate the boxes to his Legos, K’nex, Erector set, and tools.

The Barnes & Noble Mini Maker Faire continues tomorrow, November 8th. If you haven’t yet had the chance to check it out, you should definitely stop by (and plan to stay for quite a while.) 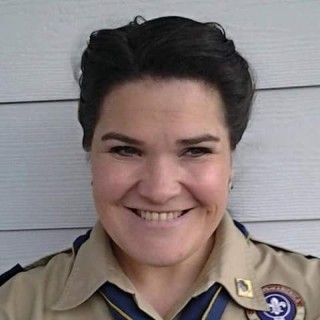